Chromium (iii) oxide, commonly called chromia and referred to as oxo(oxochromiooxy)chromium in IUPAC nomenclature, is an inorganic compound containing chromium and oxygen represented by the chemical formula Cr2O3 [1]. It naturally occurs as the mineral eskolaite and is a highly insoluble compound with high thermal stability, having the properties of both an acid and a base [2, 3, 4]. 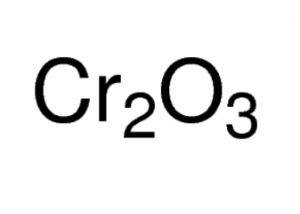 How is Chromium (III) Oxide Prepared

It is produced through the reduction of sodium dichromate using sulfur at high temperatures indicated by the redox reaction [6]:

Reaction with Other Compounds

It reacts with dilute hydrochloric acid to form chromium (iii) chloride and water [8]: 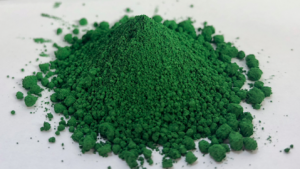 Exposure to chromium (iii) oxide through mouth and skin can cause acute toxicity [1]. It may cause an allergic skin reaction and serious eye damage [1]. It can also cause reproductive toxicity and is harmful to the unborn child [1].