Livermorium (pronounced as liv-er-MORE-ee-em [2]) is a synthetic, radioactive metal [3] denoted by the chemical symbol Lv [1]. Four isotopes of the element with their mass numbers between 290 and 293 have been produced so far. Of them, the most stable one is Lv 293 with a half-life of 61 milliseconds [1]. It belongs to the family of post-transition elements [9]. 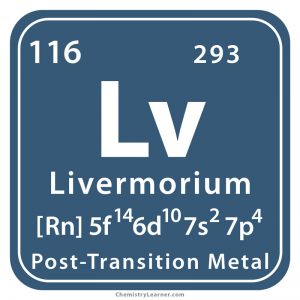 It is not found naturally on the earth. Small amounts of the metal have been produced in the lab [1].

Origin of Its name: It is named after the Lawrence Livermore National Laboratory (LLNL) in California, USA [1].

Who Discovered It: A team of scientists led by Yuri Oganessian, Vladimir Utyonkov and Kenton Moody at the Joint Institute of Nuclear Research (JINR) in Dubna, Russia [1].

There were several attempts to make the element, all of which were unsuccessful until 2000 when researchers at JINR synthesized it for the first time. Since the discovery utilized target material supplied by LLNL, the element was named after the facility. It was (is) created in the laboratory by bombarding curium atoms with those of calcium [1]. 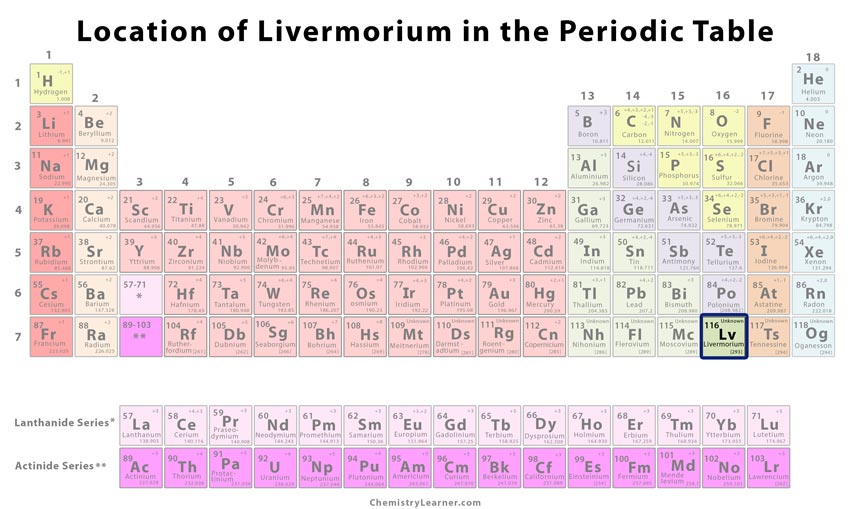 Location of Livermorium in the Periodic Table

Properties and Characteristics of Livermorium 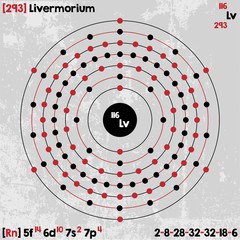 Since only a few atoms of the element have been made to date, its use is limited to laboratory research [1].

Can it be Dangerous

The naturally radioactive property of the element makes it potentially harmful [3].

It is not available commercially and is only produced in laboratories in minuscule amounts [1, 3].