Radon (pronunciation: RAY-don) is an odorless, radioactive element that belongs to the family of noble gases and is represented by the chemical symbol Rn [1, 2]. It is colorless at room temperatures, but becomes phosphorescent when cooled below its freezing temperature and gradually turns into orange-red when the temperature is further lowered to the boiling point of liquid air [4]. 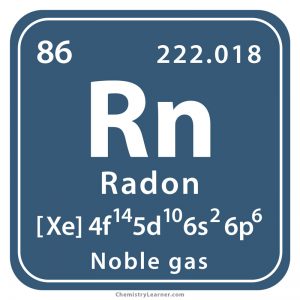 Where is Radon Found

Radon is always found in nature because it is produced from the radioactive decomposition of radium-226 that is present in phosphate rocks, uranium ores, metamorphic rocks, and common rocks like limestone [1, 3]. A small amount of radon also occurs in the atmosphere [1].

Who discovered it: The German physicist Friedrich Ernst Dorn is known for its discovery [1].

In 1899, Robert B. Owens and Ernest Rutherford found a radioactive gas emanating from thorium [1]. In that same year, Marie and Pierre Curie detected a gas being released by radium [1]. In 1900, Ernst Dorn discovered a gas while studying the decay chain of radium at the German city of Halle [1].

We now know that the radioactive gas observed by the Curies and Ernst Dorn was Radon-222 while the gas detected by Rutherford was Radon-220 [1]. In 1908, Robert Whytlaw-Gray and William Ramsay collected enough radon and determined the properties of radon at the University College, London [1]. 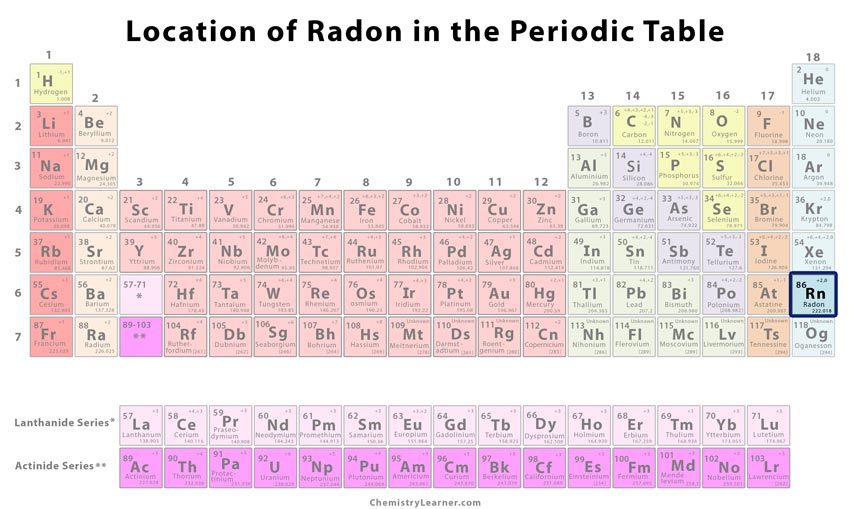 Location of Radon on the Periodic Table

Properties and Characteristics of Radon

The decay products of radon have been considered as being carcinogenic [7]. Since it can be inhaled, people exposed to high levels of radon are at risk of developing lung cancer [15]. The chances of getting affected by lung cancer are much higher in smokers who are exposed to radon [15]. It is thought to have had played a role in evolution and could be responsible for the background radiation of the Earth which can cause genetic modifications [1]. 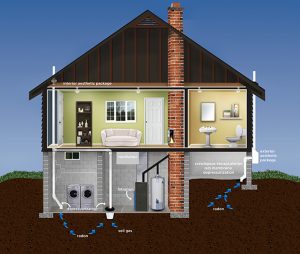