Agmatine is a chemical compound which functions as a neurotransmitter, helping in releasing pituitary hormones such as the Growth hormone and Luteinizing hormone. Due to this, they are frequently consumed as a useful dietary supplement by bodybuilders and athletes. It plays a pivotal role in polyamine biosynthesis. The German biochemist Albrecht Kossel first coined the term “Agmatine” in 1910 while studying herring sperm.

The IUPAC Name for this compound is N-(4-Aminobutyl)guanidine.

Other Names for Agmatine

Some of the other names for Agmatine include (4-Aminobutyl)guanidine and 1-Amino-4-guanidinobutane. 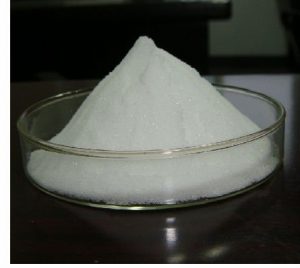 The chemical formula for Agmatine is C5H14N4.

Agmatine is produced by the decarboxylation of arginine.

The physical and chemical properties of Agmatine are listed below:

The chemical structure of Agmatine is as follows:

The molecular weight or molar mass for this compound is 130.19 g/mol.

Agmatine appears as a solid structure under standard temperature and pressure.

The specific heat of vaporization for Agmatine at STP is 0.3622 kilojoules/gram.

The critical temperature for this compound at STP is 733K.

The critical pressure for this compound at STP is 3.64 MPa.

Agmatine is highly soluble in water.

Agmatine is chemically manufactured in the brain and stored in the synaptic vesicles which are then used in releasing important peptide hormones. It also helps in the production of Nitric Oxide while reducing the growth of enzymes like Nitric Oxide Synthase.

Agmatine helps in the secretion of important pituitary hormones such as growth hormones and Luteinizing hormones. Hence it is often consumed as an important health supplement by fitness enthusiasts, bodybuilders and athletes as well as by ageing people.

Consumption of this substance can also help to improve the mood as it has certain antidepressant and anti-anxiety properties.

Agmatine sulfate is a popular form of health supplement which provides the same health benefits as Agmatine and is much more effective. It is found in white powder form.

Agmatine supplements should be consumed in dosages as recommended by physicians. Occasionally it can produce some gastrointestinal side effects such as vomiting, diarrhea and nausea. High consumption of this substance can reduce one’s overall tolerance of pain.

Agmatine is a chemical that serves as a powerful neurotransmitter. It can also be used to treat health problems in animals such as neurotrauma and ischemia.