Definition: What is Claisen Condensation?

The Claisen condensation is an organic reaction used to form a carbon-carbon bond between two ester molecules or one ester molecule with another carbonyl compound in the presence of a strong base (alkoxide). The product formed is a beta-keto ester.During the reaction, an enolate is formed when the alpha-hydrogenis removed from the ester. If the ester lacks an alpha-hydrogen, as in the case with most aromatic carbonyl compounds, then it is incapable of forming the enolate. Such type of condensation reaction is called crossed or mixed Claisen condensation [1 -3]. 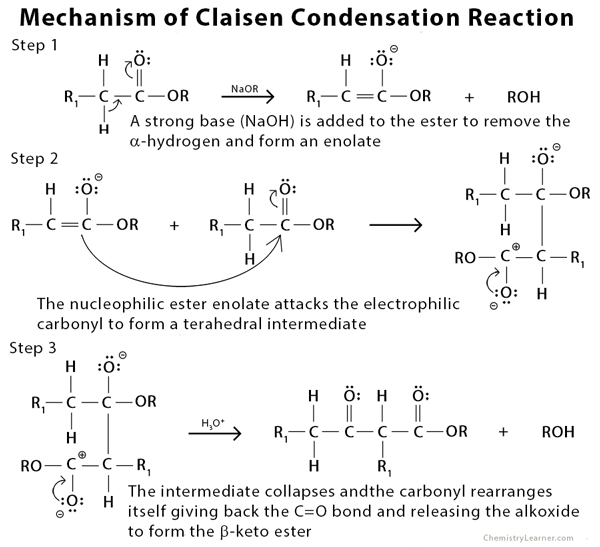 In case of Claisen Schmidt Condensation, an aldehyde or a ketone having an alpha-hydrogen is used to react with an aromatic carbonyl compound without any alpha-hydrogen.

Ans. Only those esters that contain alpha-hydrogen can undergo Claisen Condensation reaction.

Ans. A beta-keto ester is a compound which is formed by joining a ketone and an ester with a carbon between them.

Table Of ContentsIntroductionIntroduction Alcohol is an organic compound that has...