Rosin Acid is a resin acid that is used for a number of varied purposes. Read on to know all about this acid, its chemical composition, uses, potential risks and more.

What is Rosin Acid?

It is a type of organic acid that is most easily available. It is the main irritant that is found in resin and Pine wood. This acid is also known by other names like Abietic Acid and Sylvic Acid.

Rosin Acid is the chief component of common resin. It can be found in Pinus kesiya Royle, Pinus insularis (Khasi Pine), Pinus sylvestris (Scotch Pine) and Pinus strobus (Eastern White Pine). The ester of this acid is known as Abietate or Rosin Acid Ester.

Rosin Acid is soluble in acetone, ethers and alcohols.

The acid number for pure Rosin Acid is typically around 170. 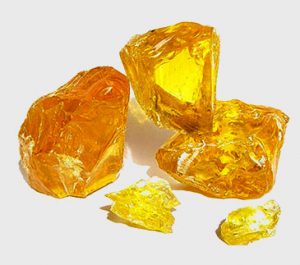 Commercial Rosin Acid is generally a partially crystalline yellow solid or a glassy compound that melts at as low temperature as 185 °F (85 °C). It is a member of the organic compounds of Diterpene group. Here are some pictures that will give you an idea about the molecular structure of this acid.

It can be found in the solid part of the Oleoresin, the naturally occurring mixture of an essential oil and a resin of coniferous trees.

Rosin acid content is highly soluble in substances like Petroleum Ether and Acetone. It has a molar mass of 302.45 g mol−1. The molecular formula of this acid is C20H30O2.

Rosin Acid manufacturers can get this substance from three sources. These are

This is the acid extracted from pine stump. Once pine trees are harvested, the stump is left to rest above the ground for approximately ten years. This lets the sapwood and bark degenerate and come off the wood that remains inside. The wood is rich in resinous material. This can be drawn out from the stump.

It can be found by distilling crude tall oil which is a by-product of the pulping process of kraft sulphate. Crude tall oil, abbreviated as CTO, contains 70-90% of acidic substance that consists of rosin and fatty acid. Tall Oil Rosin has the ability to crystallize. It is generally composed of 200-600 ppm (parts per million) of sulphur. Presence of sulphur gives this acid an odor that is stronger than other wood rosin and gum rosin. Tall Oil Rosin (TOR) that is finely distilled can produce esters that are as good as those obtained from wood and gum rosin derivatives.

There was a time when Rosin Acid could only be obtained from pine gum. Gum Rosin is actually the pine gum (oleoresin) of a surviving pine tree. Oleoresin can be easily harvested and it only requires wounding the tree periodically and collecting its extract into cups.

Rosin is not a polymer like hydrocarbon resins. It is actually an amalgamation of different molecules. It is a combination of eight intimately associated rosin acids. The combination is characterized by

The proportion of these isomers is based on the method of extraction and species of the tree out of which the rosin is collected. The molecular weight of this acid varies to a large extent from other hydrocarbon resins. This acid is compatible with a wide range of polymers. The acids are highly reputed for their tack contribution to adhesives. However, addition of this acid usually reduces cohesive strength in adhesives.

Some of the main Sylvic Acid uses are

As an adhesive component

The acid has been traditionally added in adhesives. The adhesive industry has been using this acid for a long time as a raw material. It is either used directly or converted into derivatives for use. Rosin acid is extracted from pine tree as wood rosin, tall oil rosin and gum rosin.

It is rubbed over the bows of musical equipments to reduce their slippiness. It has also been used for a long time as waterproof filler for ships.

Rosin Acid Soap is quite popular. This is an acid that has this acid as its base. Nowadays, the rosin soap is brought as a liquid to mills. Earlier, it was delivered as a paste. Before using soaps made by Abietic Acid MSDS should be consulted and the recommendations of the supplier should be followed. However, rosin acid oil based liquid soap does not give rise to any particular risks.

This acid is also commonly used as a kind of solder. Rosin is flux which goes away once you use it for soldering. It is non-sticky, unlike acid core which is another common type of solder. Acid Core is very sticky and beginners should avoid using it. There are three main kinds of Rosin core solder usually found in the market. These are

The numerals represent the ratio of tin to lead presence in the solder. 50/50 indicates there is 50% Tin and 50% Lead in the solder.

Abietic acid is a contact allergen of mild strength. It is mentioned in the list of the United States Law known as Toxic Substances Control Act (TSCA). Exposure to this chemical or directly consuming it can give rise to different symptoms. Rosin Acid is for industrial usage and not for consumption. Chemical poisoning from Rosin Acid ingestion can cause

Symptoms like these can go away naturally. But it is better to seek immediate medical treatment to get rid of these discomforting symptoms much faster.

Hydrogenated Rosin Acid has a light color. It is used as

It is also used widely in the electronic industry as soldering flux.

Hydrogenated Rosin Resins have a number of advantages over non-hydrogenated ones. These include

These lead only to a slight decrease in cohesive strength of block co-polymer arrangements. This acid can also be used in adhesives based on amorphous polyolefin.

Why is Rosin Acid Hydrogenated?

Hydrogenating makes rosin molecules more stable. The acid becomes more resistant to high oxidation and high temperatures. It is one of the main forms of modified rosin.

Almost all synthetic fluxes have a Rosin-type organic acid base. However other materials like Pentaerythritol Tetrabenzoate, Bile acids, and Polyvinyl Acetate are also used, especially in making low solid formulation. Fluxes consist of a solvent that dissolves the rosin and results in a fluid state.

One response to “Rosin Acid”