Definition: What are the Alkali Metals

The alkali metals, also known as the alkali metal family is a group of six elements characterized by common physical and chemical properties, a similar electron configuration, and shared periodic trends. All the alkali metals are found in nature, but being highly reactive, they do not occur freely in their pure form [1]. 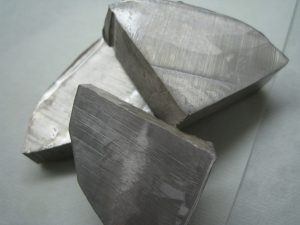 Where are the Alkali Metals Located on the Periodic Table

These are found in Group 1 (the first column from left) of the periodic table. All the alkali metals lie in the s-block since the electron on the outermost shell of their atom (valence electron) is in the s-orbital [2, 3]

Alkali Metals on the Priodic Table

Why are They Called Alkali Metals

When the elements from group 1 react with water, they all form alkaline solutions. So, the family is called the alkali metal family [4].

Common Properties and Characteristics of the Alkali Metals

Why are Alkali Metals So Reactive

Having a single valence electron (the electron on their atom’s outermost shell) makes all the alkali metals highly reactive at room temperature and standard pressure.  It takes little energy for them to lose the electron and form positively charged ions (cations) with a +1 charge. 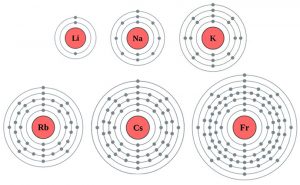 These elements readily react with even the oxygen in the air to form oxides that make their shiny surface turn pale gray within moments if left in open air [7].

How Do Alkali Metals React With Water

When an alkali metal, e.g. sodium (Na) comes in contact with water, the sole valence electron leaves the sodium atom and the reaction forms hydroxide and sodium ions along with hydrogen [5]:

The Na+ and OH–  ions are quite unstable in the aqueous solution, so they form sodium hydroxide [4]. The final equation stands like the following:

Examples of some other alkali metal-water reaction:

The heat resulting from the reaction ignites the hydrogen atoms produced, causing a considerable explosion [8].

The lower down Group 1 on the periodic table you move, the following trends are apparent in the alkali metals:

Video: Reactivity and Periodic Trends of the Alkali Metals

What are the Alkali Metals Used for

The top three elements of the group, Li, Na, and K, along with Cs, have different applications in various industries including glass-making, photography, weapons and explosives, and batteries  Sodium compounds have some everyday uses in food processing and preparation. Rb is mainly used for research purposes [10]. Fr does not have any regular application as it is rarely present in nature [5].

1. Why are alkali metals stored in oil?

Ans. Being highly reactive, alkali metals in their pure form have to be stored in oil to keep them from coming in contact with air and water [2].

2. What are the most abundant alkali metals?

Ans. Sodium and potassium are the most abundant alkali metals.

3. Why Is hydrogen not considered an alkali metal?

Ans. Despite having a single electron in its outermost shell, hydrogen (H) is not considered to be an alkali metal because:

4. What is the difference between alkali metals and alkaline earth metals?

5. Why are halogens and alkali metals likely to form ion?

Ans. Having 1 valence electron, the alkali metals try to get rid of it to achieve stability, while halogens (e.g. chlorine, bromine, fluorine etc) have seven valence electrons, meaning they try to gain 1 more electron to become stable. As a result, together they react to form ionic compounds like sodium chloride (NaCl) and potassium chloride (Kcl) [14].

6. How are alkali metals different from noble gases?

Ans. Alkali metals have a single electron on their outer shell, while all the noble gases (the Group 8 elements in the periodic table including helium, neon, argon) have a full valence band with no unpaired electron to cause a reaction with other molecules [15].