Definition: What are Alkaline Earth Metals

Alkaline earth metals are a group of highly reactive elements placed right next to the alkali metal group. Although all the alkaline metals are found in nature, their high reactivity prevents them from occuring freely or in their pure form [1, 2].

Where are the Alkaline Earth Metals Found on the Periodic Table

These belong to Group 2 (the one following with alkali metal group) in the periodic table, with all the alkaline metals lying in the s-block [3, 4]. 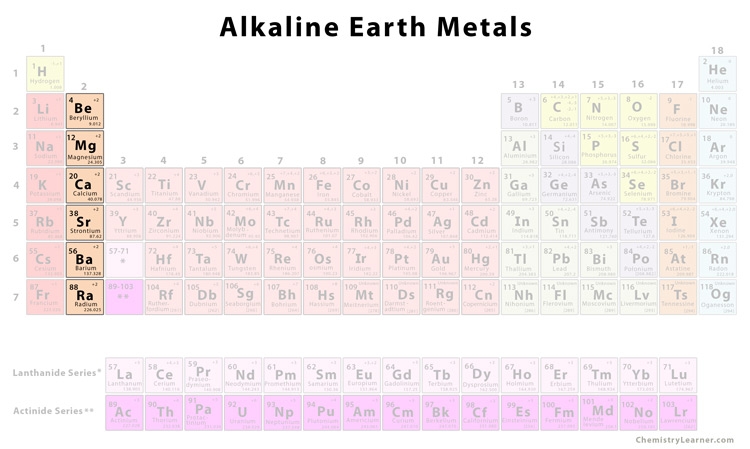 Alkaline-Earth Metals on the Periodic Table 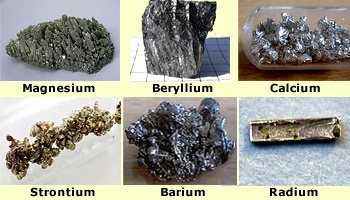 Why are They Called Alkaline Earth Metal

The alkaline metals are named as such because when mixed with water, they produce solutions with pH higher than 7, and ‘basic’ or ‘alkaline’ properties [5]. Additionally, they are found in the earth’s crust and are not affected by fire or heat [6].

Why are the Alkaline Earth Metals so Reactive

Beryllium (Be) does not react with water due to its small atomic size and relatively high ionization energy [8].

The alkaline metals react with water at room temperature to produce hydroxides that are almost insoluble in water, along with hydrogen ions to form a basic solution [8]. Here is how the equation looks for a reaction between calcium and water:

All the six  Group 2 elements react with oxygen to form oxides, though not as readily as the Group 1 elements. The reaction requires heat. The following equation shows how Magnesium (Mg) would react with oxygen (O2)

Be and Mg are widely used in the production of alloys useful in industrial constructions including heat-resistant factory tools, as well as automobile and airplane parts. Ba has applications in various medical and diagnostic procedures like X-ray and MRIs (barium meals). The most important use for Sr is in the production of fireworks as it helps create the colorful flares. Apart from radium, the Alkali earth metals are also used in flashbulbs and batteries.

Radium, being a highly radioactive element, does not have any industrial applications at present. Earlier, it was used in luminous paints and watch dials [1, 9].

Mg and Ca has vital functional and structural roles in both plant and animal physiology, with Mg being present in chlorophyll molecules, while Ca is one of the primary constituents of bones. Additionally, SR is essential to the survival of a number of marine creatures, primarily various hard corals, as the element helps in shaping their exoskeletons [1, 5].

Q 1. What is the lightest alkaline earth metal?

Ans. Beryllium is the lightest element in this family, having the smallest atomic radius.

Q 2. What is the heaviest alkaline earth metal?

Ans. Radium is the heaviest alkaline earth metal, with the largest atomic radius [10]

Q 3. What are the most common alkaline earth metals?

Ans. Calcium and magnesium are the most common alkaline earth metals

Q 4. What are the main differences between alkaline earth metals and alkali metals?