It is a radioactive isotope of Iridium with symbol 192Ir.

It is a man-made radioactive element that is produced by nonradioactive Iridium metal in a nuclear reactor.

It is a dense metal that is shiny and silvery-white in appearance.

Know about some of the chemical as well as physical properties of this element.

Know about some important facts associated with this substance.

The half-life of this isotopic substance is 73.828 days. 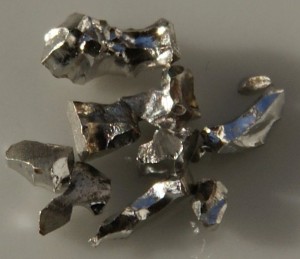 The lifetime of this radioactive element is 106.51 days.

Its decay modes are Beta Particles and Gamma Radiation. It decays 95.13% of the time through negative beta emission to 192Pt (daughter nuclide). For the remaining 4.87% of the time, it decays through electron capture to 192Os. A gamma photon with an average energy of 0.38 MeV (max 1.06 MeV) is released in the process.

As aforesaid, Iridium-192 is a radioactive iridium isotope. It is also the most common isotope used for high dose rate brachytherapy applications. Once World War II ended, new isotopes such as cobalt-60, caesium-137 and iridium-192 became available for Industrial Radiography. Consequently, the use of radon and radium decreased.

Being a radioactive substance, necessary safeguards must be taken while using it. It should be kept safe in order to avoid accidental exposure or deliberate misuse and disposed following state guidelines. In case of an accidental exposure, victims should remove clothes and discard them permanently. It is important to take showers. Immediate medical help should be sought.

High-dose rate (HDR) Iridium-192 Brachytherapy is often facilitated with the aid of a flexible applicator. It is also used for medical treatment, such as for the cure of stomal recurrence after Tracheostomy is performed for subglottic carcinoma.

Iridium-192 suppliers render this radioactive element in low doses in wires of 100 – 140 mm in length and 0.3 mm in thickness that can still be cut into smaller pieces as needed. The wires are non-reactive and flexible.

For high dose rate, Platinum/Iridium alloy capsules that are 3.5 mm long and 0.6 mm diameter in size are used. These, used a high 192Ir concentration, provides it with a high activity. The tablet comes coated in Platinum of thickness 1 mm, which weaken the consistency of any electrons produced during decay. The tablet is also welded to the end of a wire allowing it to be deployed using a HDR Remote Afterloading machine.

This radioactive element does not necessarily require sterilizing by end user when deployed for high dose rate (hdr) as it is rendered in a sealed sterilized package.

Know about some of the main applications of this radioactive substance.

Ir-192 implants have medical uses in healthcare industry. These are used for curative reasons, primarily in the breast and the head. These implants are manufactured in wire form and are introduced into the target area through a catheter. The implant wire is removed after being left in place for the time required to deliver the desired dose. This procedure is very effective at providing localized radiation to the tumor site while minimizing the patient’s whole body dose.

There are numerous advantages of using this radioactive element which can be summarized as follows:

Some of the main disadvantages of this element are:

192Ir is used as a source of gamma radiation for curing cancer with the application of Brachytherapy. Brachytherapy is a type of radiotherapy that involves the placement of a sealed radioactive source inside or adjacent to the region that requires treatment. Specific treatments involve procedures such as:

Very little is known regarding the toxicity of iridium compounds. This is due to the fact that they are used in extremely small amounts. However, the radioisotopes of iridium are known to be quite dangerous. The same can be said for 192Ir, which is a radioactive Iridium isotope. Accidental exposure to 192Ir radiation can lead to injuries. High-energy 192Ir gamma radiation can elevate the risk of cancer.

External exposure to this substance can lead to problems like

Internal Iridium-192 exposure can only happen if anyone swallows its tablet or other forms sold commercially. Ingestion of 192Ir can result in burning of the linings of the intestines and the stomach. Swallowed tablets are usually excreted in feces. Long-term effect would depend on how powerful the swallowed contents were and how much duration they stayed in the body. 192Ir as well as other isotopes of Iridium such as 192mIr and 194mIr tend to get deposited in the liver. This can result in health hazards from both gamma and beta radiation.