Actinolite is a fibrous silicate mineral (amphibole) belonging to the group of double chained inosilicates. The name of the mineral comes from the Greek word “Aktis” or “Aktinos” which mean a ray or a beam.

The chemical formula for Actinolite is Ca2(Mg, Fe)5Si8O22(OH)2. It is expressed in words as Calcium Magnesium Iron Silicate Hydroxide.

Actinolites can be either compact and dense or fibrous and brittle.

Actinolite crystals are generally elongated, prismatic and flattened in their shapes.

Actinolite crystals have a vitreous and silky luster.

Actinolites can be either transparent or translucent.

Actinolite crystals have a monoclinic structure. They have three axes with unequal lengths. They tend to form rectangular prisms with parallelogram bases. They have a splintered surface.

Actinolites come in a wide variety of colors that range from creamy white to green and green-black or grey and grey-green. Dark color varieties such as brown or black may also be found when the iron content is higher. The thin section of Actinolite can be colorless or may range from pale green to deep green.

The hardness of Actinolite, measured in Mohs scale of mineral hardness, falls within a range of 5.5 to 6 with an average of 5.7.

Actinolites are biaxial negative with a big axial angle and a weak dispersion. They have a double refractive index with an anomalous aggregation. Refractive index is between 1.606 and 1.641.

This mineral has a low extinction angle.

Actinolites are considered to be intermediate crystal formations that fall between magnesium-rich tremolite (Ca2Mg5Si8O22(OH)2) and iron-rich ferro-Actinolite (Ca2Fe5Si8O22(OH)2). In an Actinolite crystal, iron and magnesium ions can get exchanged freely. The fibrous mineral asbestos is derived from Actinolite.

Actinolite mineral crystals frequently form in igneous rocks when they are exposed to high pressure and very low temperature. They also frequently occur in metamorphic rocks such as schist, dolomite and limestone. Actinolite is also found in metamorphosed mafic and ultramafic rocks.

There are different forms of Actinolite which vary slightly in their chemical structure. Nephrite, tremolite, ferro-actinolite and byssolite are the common varieties. 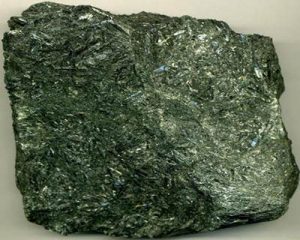 Actinolite is most commonly used as asbestos in manufacturing and industrial domains. Amphiboles are a common asbestos variety along with serpentine asbestos. Other forms of asbestos Actinolites are tremolites and anthophyllites. They make good insulation materials. Actinolites are also used in structural fire-proofing, in construction as well as for gardening purposes.

Actinolite quartz is green in color. This quartz is used for its metaphysical properties. They can be used as a protective shield to ward off negative influences. They are also believed to give spiritual guidance to its user and help an individual walk on their chosen path. For the user, it develops a strong sense of self worth and an overall sense of responsibility.

It is believed that Actinolite quartz acts as a channel for Universal Life Force and promotes growth and fertility. This is why it is often kept in gardens to promote the growth of plants and flowers.

The black variety of Actinolite heals the root chakra. It helps one to achieve mental security by helping in accepting changes and adjusting well to traumatic incidents.

Some Actinolites are also used as gemstones. Nephrite is used to create jade stones. They can be green or white in color. Jade is used for ornamental and spiritual purposes. Another form of gemstone called the cat’s eye is formed from the chatoyant Actinolite. The cat’s eye can be translucent or opaque and their color varies between green and yellowish green. Transparent Actinolites are rare and are used for making gems as well.

There are many locations across the world where Actinolite is mined. Some of these locations are mentioned below:

Where to buy Actinolite?

Actinolite asbestos has been classified as a carcinogen which can cause cancer. An estimated 10000 deaths are caused by asbestos poisoning every year in United States. Actinolite Asbestos has been found in various materials such as:

The level of Actinolite asbestos fibers are higher near an asbestos mine or a factory, or an under construction building using asbestos products or in a toxic waste site.

Accidental ingestion or inhalation of asbestos fibers results in these fibers getting embedded in stomach, heart or lungs. Once inside the body, these fibers are very difficult to get rid of and might cause cellular damage which can again lead to mesothelioma or lung cancer.  Other diseases caused by ingestion or inhalation of Actinolite asbestos are

There are a number of methods used to treat patients infected by asbestos health hazards. Some of these are surgery, chemotherapy and radiation. Chances of effective cure depend on an early diagnosis. Hence, it is advisable to contact a doctor immediately if a family member is infected by asbestos poisoning.

Actinolite has certain characteristics due to which it might prove to be hazardous to human beings. If the necessary precautions are taken, one can avoid these health issues. These substances are great for use as gemstones and also for their healing properties. They also help in growth and mental wellbeing of a person.

One Response to Actinolite