Selman Waksman was the first person to isolate this antibiotic along with his co-worker H. B. Woodruff in 1940. US FDA first approved this compound on December 10, 1964. In the same year, it was launched under the trade name of Cosmegen by Merck, Sharpe and Dohme. 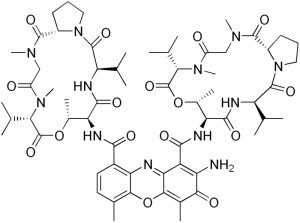 The main use of this antibiotic is as an investigative tool for the purpose of inhibiting transcription in cell biology. Actinomycin D binds the DNA at the transcription initiation complex and prevents any elongation by RNA polymerase. It can interfere with DNA replication as it is able to bind DNA duplexes. However, other chemicals like hydroxyurea can function better as DNA synthesis inhibitor in laboratories.

The chemical formula used to denote this material is C62H86N12O16.

Appearance: It is a bright red or orange crystalline powder.

Molecular Mass: The molecular mass of this material is 1255.42 g/mol.

Solubility: The solubility of Actinomycin D is 1 g/ 25 ml at 10 °C temperature. It is mainly soluble in methanol, ethanol, DMF and DMSO but sparingly soluble in water.

Here is the structure of this crystalline material.

This polypeptide antibiotic is used for various clinical and research purposes.

As Chemotherapy: This relatively older chemotherapy drug has been used for this purpose for many years. Cosmegen is a clear yellow liquid which is administered intravenously. This drug is commonly used for the treatments of various types of cancers such as gestational trophoblastic neoplasia, Wilms’ tumor and rhabdomyosarcoma.

As an Antibiotic: Actinomycin D was the first antibiotic proved to have anti-cancer activity. Earlier it was used as an anti-cancer antibiotic. However, its high toxicity levels have prevented this use at present times. This toxic material is damaging genetic materials.

7-Aminoactinomycin D (7-AAD) is the fluorescent derivative of Actinomycin D. Both these materials are widely used as stains in various flow cytometry and microscopy applications. Both these compounds have an affinity for GC-rich DNA regions which makes them highly useful as DNA markers. 7- Aminoactinomycin D can be used for determining apoptosis (self killing of the cells) as it can bind to single stranded DNA. It is also useful for distinguishing between live cells and dead ones.

Actinomycin D is the most important actinomycin with various uses. It has been used for chemotherapy for a very long time. However, its toxic properties prevent it from being used for some clinical purposes.

One response to “Actinomycin D”