Iron(iii) sulfide also called ferric sulfide or iron sesquisulfide is one of the members of iron(3+) sulfides with IUPAC name iron(3+) trisulfide and chemical formula Fe2S3 [1, 2]. It is a relatively unstable artificial black solid that decomposes and turns into a yellow-green powder at room temperature [2].

It is produced by the addition of cooled iron(iii) chloride solution to refrigerated sodium sulfide solution, as represented by the following equation:

It can also be synthesized as a by-product of desulfurization of hydrogen sulfide gas that is passed through hydrated iron(iii) oxide: 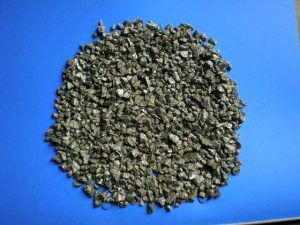 It undergoes a decomposition reaction when combined with hydrochloric acid [4]:

Properties and Characteristics of Iron(III) Sulfide

As a source of sulfur and iron(ii) sulfide during the decay of ferric sulfide at room temperature (about 20 °C).