Definition: What Are Metalloids

A metalloid is an element having characteristics in between that of metals and non-metals. There are 6 elements in this group [1].

Where are the Metalloids Located on the Periodic Table

The metalloids are found to the right of the post-transition elements and to the left of the non-metals [2]. 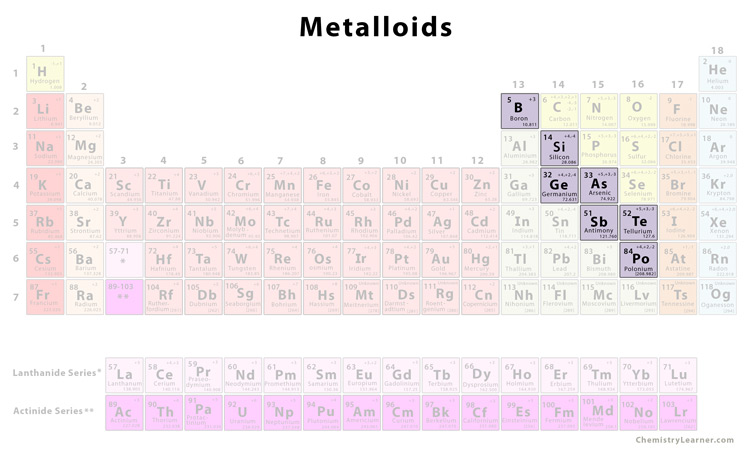 Metalloids on the Periodic Table

Polonium (Po) is also commonly considered a metalloid [1]. Other elements included in this list less often include carbon (C), aluminum (Al), selenium (Se) and astatine (At) [3].

Common Properties and Characteristics of Metalloids

Generally, metalloids have physical and chemical properties between that of metals and non-metals [3].

The difference of Metalloids from Metals and Non-metals

Chemically, their oxides show amphoteric behavior. Also, their electronegativity and ionization energies are intermediate to those of metals and non-metals [5].

Due to their intermediate electronic structures, metalloids have enough empty orbitals into which electrons can move, allowing for conduction of electric current. However, this phenomenon happens only when the metalloid is heated or when small amounts of certain elements are introduced in their crystal lattices (called doping) [1]. These specially treated metalloids are called semiconductors.

Most of the metalloids find their use in industry. Boron is used as an alloying agent and in pesticides and insecticides [3]. Silicon and Germanium have industrial application in electronics as semiconductors, while the former is also used in ceramics and glass making [1, 3]. Arsenic finds its use in insecticides, while antimony and tellurium are mainly used as alloying agents [2, 3].