Americium-241 is a radioactive substance that principally emits Alpha rays. It is one of the most important and useful isotopes of Americium or Am. It radiates Alpha Rays.

In its physical form, it appears as Americium oxide contained within a ceramic cylinder.

“Am” was first said to be discovered from Plutonium (Pu) in the year 1945. The discovery was announced by well-known chemist Glenn Seaborg who also discovered Pu along with his colleagues. 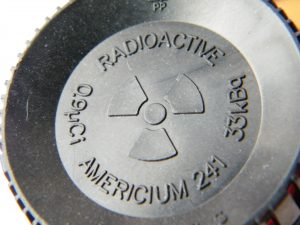 This experiment was done at the University of Chicago’s Metallurgical Laboratory (now the Argonne National Laboratory).

The symbol used to denote this radioactive isotope is 241Am or Am-241.

These days, the isotope is produced artificially as a decay product of Plutonium-241. It is also a resultant material of nuclear bomb explosions.

This substance undergoes Alpha decay, meaning it emits Alpha (α) Particles in its process of decay. In addition, it radiates small amounts of Gamma (γ) Ray as a by-product.

This substance decays and changes into Neptunium-237 (237Np) which makes it the daughter nuclide of 241Am. The ultimate product of this series is Bismuth-209. Following is the complete decay chain:

Following is the Alpha decay equation for this isotope:

Some of the main chemical properties of this substance are as follows:

There are many different isotopes of Am, but Am-241 is the most important and useful among all of them. The most important use of this material is as an element of the Smoke Detector. Following are some of its other uses:

All these applications use Gamma Ray emission. So, the Gamma radiating properties of this isotope are utilized for these purposes.

The European Space Agency is considering the use of 241Am in their space probes.

Smoke detectors or Smoke Alarms are very important safety devices. Two main types of this detector available in the market are:

This substance is an important component for the Ionization Chamber Smoke Detectors. There is a small metal chamber in these detectors that contains a small amount of this substance. The chamber may also use some other radioactive substance for this purpose.

The main function of this device is to detect the presence of smoke caused by fire. The ionizing α radiation from Americium-241 is utilized to create ions that produce a low and steady electric current. When the smoke particles enter the chamber, they create a disturbance and trigger the alarm in the detector.

Radioactive materials are kept to a minimum in the device so that it cannot have any damaging effects of radiation on the human body.

241Am may cause different serious health problems in case of over exposure. While using this device, the following points should therefore be kept in mind:

Any of these actions will expose you to the radioactivity of the material.

Even though it is not illegal to throw your Americium-241 Smoke Detector in the trash, it is best to return it to the manufacturer to dispose it of safely.

It is very unlikely for people to come into direct contact with this material. It can have adverse effects on human health in case of inhalation and ingestion.

It was spread into the environment in large amounts during the nuclear weapon testing of 1950s and 1960s and also the Chernobyl Nuclear Disaster of 1986.

In case of accidental exposure of skin to this substance, the exposed region should thoroughly be washed along with water and soap. All clothes and accessories should be removed and cleaned or washed thoroughly before reuse.

Inhaling contaminated air or eating or drinking contaminated food or water may directly expose a person. In case of inhalation, the Am-241 tends to concentrate in the lungs. The amount depends on the form of its chemical compound. The soluble particles dissolve and pass into the bloodstreams. But the remaining substance may stay in the lungs or the stomach. The un-dissolved substance leaves the human body through the feces.

In case of accidental consumption of Am-241, it is necessary to excrete within a short time. Otherwise, it tends to accumulate in the liver and the skeleton and cause serious liver and bone problems and diseases.

The half life of this material is very long (432.2 years). As a result, it may remain and undergo decay within the body and cause serious health problems for humans. It may even be responsible for causing cancer of the nearby organs and tissues.

External exposure to the γ radiation may also cause cancer of different organs.

As aforesaid, exposure to this material can pose acute health risks. This is a toxic material that needs to be handled carefully.

Special protective equipments like gloves, safety goggles and footwear covers should be used while dealing with Am-241 in industries. People using this substance should also ideally wear proper respiratory equipments to avoid ill-effects due to inhalation of this material.

In case of accidental release or spillage of this material, everyone in the vicinity should be immediately alerted. The region should be evacuated and an absorbent material should be used to suck the dispelled substance. The waste should be disposed of in separate containers and aid should be summoned.

There are different tests to determine the amount of this material in different parts of an organism. These tests are useful in treating patients of Am-241 over-exposure. All these tests need special equipments to be carried out.

Though it is most important among all the radioactive isotopes of Am, it has the potential to cause critical health problems for humans. Care should be taken that there is no possibility of exposure for anyone using any application containing Am-241.