Neptunium (pronounced as nep-TOO-nee-em) belongs to the family of actinide elements and is denoted by the chemical symbol Np [1]. 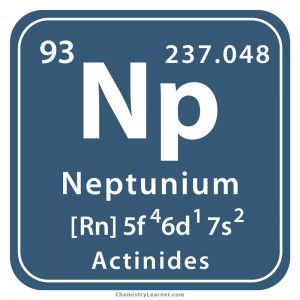 It has 20 isotopes out of which neptunium-237 is the most stable one with a half-life of 2.14 million years that undergoes alpha decay to form protactinium-233 [3].

Where is Neptunium Found on Earth

The element is known to be present in small quantities associated with uranium ore deposits [1]. Its natural occurrence is due to beta decay of uranium into neptunium-237 and neptunium-239 [3]. 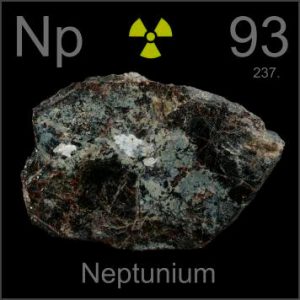 Origin of its Name: It has been named after the planet Neptune [1].

Who Discovered Neptunium: Edwin McMillan and Philip Abelson were the discoverers of the element [1].

In 1934, Enrico Fermi in Italy claimed to be successful in producing elements 93 and 94 by bombarding uranium with neutrons. However, Ida Tacke-Noddack challenged his analysis by pointing out that he actually discovered nuclear fission of uranium. In 1938, similar claims were made by Horia Hulubei and Yvette Cauchoi, but they were rejected, as the new element was not believed at that time to be present in nature.

Finally, in 1940, McMillan and Abelson at Berkeley, California were finally able to confirm the presence of the new element. While bombarding slow neutrons with uranium, beta-rays were produced with unusual properties, suggesting the presence of a new isotope, later confirmed to be the element 93 [1]. 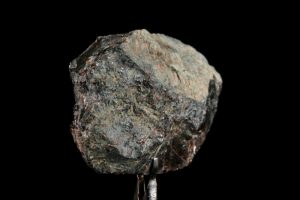 Classification and Position of Neptunium on the Periodic Table [1] 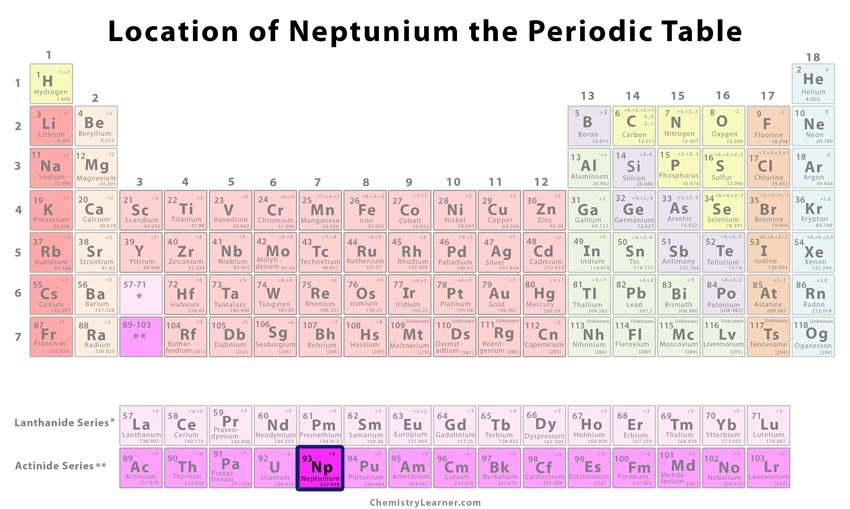 Location of Neptunium in the Periodic Table 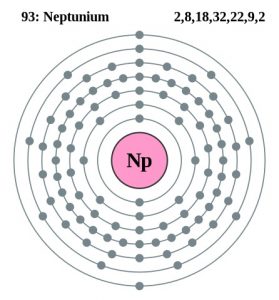 Neptunium-237 is used in neutron detectors. When bombarded with neutrons, it produces plutonium-238 which in turn in is used in spacecraft generators and terrestrial navigation beacons [1, 3].

Toxicity and Dangerous Effects of Neptunium

Although there is not much information about its hazardous effects, some animal studies have shown its accidental ingestion could cause damage to the liver, kidneys, and brain [5].

It is not available outside of laboratory production.

One response to “Neptunium”