Hassium (pronunciation: HAS-ee-em) [1] is a synthetic [2], highly radioactive chemical element [1, 3] belonging to the transition metal family, represented by the chemical symbol Hs [2]. It is thought to have a solid metallic, silvery look and is quite a difficult element to study because only a few atoms have been made to date [1]. 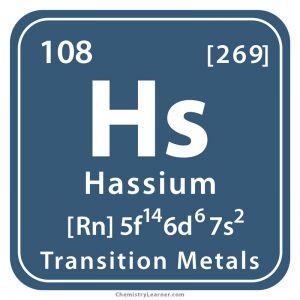 It has 15 isotopes [3], out of which the most stable one is hassium-276, with a half-life period of 1.1 hours [3]. As of now, the final product obtained after the radioactive decay of this isotope is not known [5].

Origin of its Name: The element is named after Hesse, the German state where it was first created [3].

Who Discovered Hassium: The German physicists Peter Armbruster and Gottfried Münzenberg are credited with discovering this element [3].

How was Hassium Discovered

In 1978, a research team headed by two Russian physicists Vladimir Utyonkov and Yuri Oganessian made the first effort to create element 108 at the JINR (Joint Institute for Nuclear Research) in Russia [3]. They discovered the new isotope 270 by bombarding radium with calcium [3]. Five years later, they bombarded bismuth with manganese to synthesize isotope 263, bombarded lead with iron to create isotope 264, and californium with neon to get isotope 270 [3].

In 1984, a team of researchers headed by Gottfried Münzenberg and Peter Armbruster created isotope 265 at GSI (Gesellschaft für Schwerionenforschung) in Germany by bombarding lead with iron [3]. The data from GSI was much more reliable and accurate as compared to that from JINR, and thus, the team from GSI was given the rights to name the element [3]. 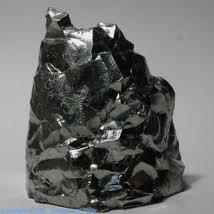 Classification and Position of Hassium on the Periodic Table 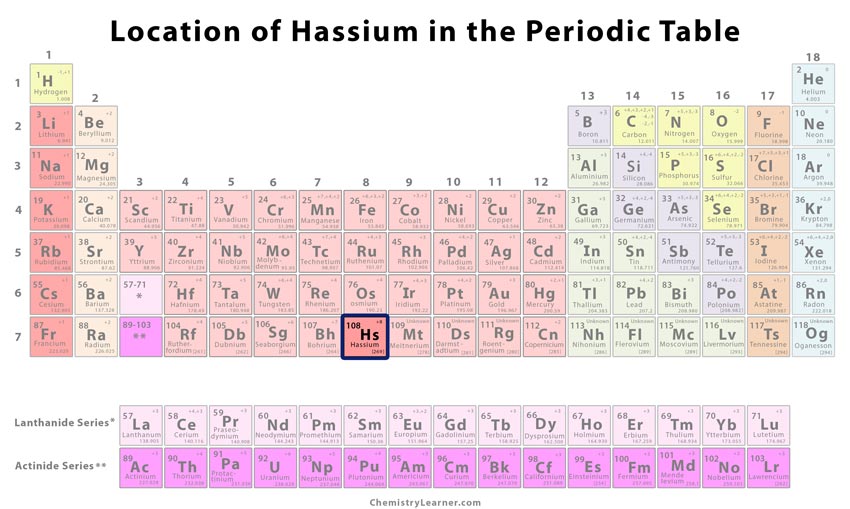 Location of Hassium in the Periodic Table

Properties and Characteristics of Hassium 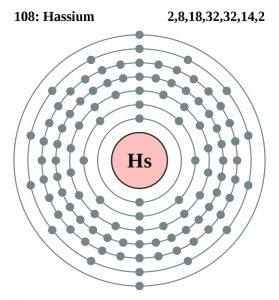 What is Hassium used for

Since Hassium is not a naturally occurring element and has never been created in abundance, its use is now restricted only to research studies [3]. It is believed that the radioactive element might react with the other elements of its group if produced in large amounts [9].