What is Sodium cyanide?

It is a poisonous, hygroscopic inorganic compound, which emits an odor of hydrogen cyanide under damp conditions. The high toxicity of the compound is mainly attributed to the presence of cyanide, which has a strong affinity for metals.

Its chemical formula is NaCN.

The structure of solid NaCN is related to that of sodium chloride, in which the numbers of cations and anions are equal with six coordinates. Each sodium ion forms pi-bonds with two CN- groups, two “bent” Na—CN, and two “bent” Na—NC links.

Some of the physical and chemical properties of this compound are:

It is available in the form of white, crystalline powder.

It has a characteristic faint almond-like odor under moist conditions. However, it is generally odorless under dry conditions.

It is not a volatile compound and usually marked as a non-flammable agent.

How to make Sodium cyanide?

In the past, NaCN was prepared by Castner-Kellner process, an electrolytic method involving the reaction of sodium amide with carbon at high temperatures.

However, this process has now become obsolete due to its low production rate and long length of time.

The new method of production of the chemical agent is performed by a simple acid-base reaction. Here, hydrogen cyanide or prussic acid is bubbled into sodium hydroxide, a strong base to form crystalline salt of sodium cyanide.

Hydrogen cyanide is a very weak acid from which NaCN is derived as seen in the above reaction. Due to this condition, NaCN becomes highly unstable and in the presence of moisture easily reverts back to HCN. The reversible reaction occurs even in mild humid conditions and is called hydrolysis. It is during this reaction, moist NaCN generates an odor quite similar to that of a bitter almond. In the presence of a highly strong acid, NaCN easily reacts with it to form HCN. The process may prove risky with cyanide salts.

The structure of potassium cyanide (KCN) is similar to that of NaCN. The effects of both cyanide compounds are also identical. Ingestion of KCN or NaCN can cause headache, nausea, dizziness and nervousness. Extraction of gold can also be done using KCN through similar process. In this reaction, the resulting product is potassium gold cyanide (KAu (CN2)).

These are around 98% pure and primarily used by the mining industry. The briquettes generally appear white and resemble charcoal briquettes (packed charcoal for fuel and kindling). Solid forms of cyanide can be easily transported over longer distances due to higher concentration of the product. It is usually packed in double sealed bags inside a timber crate weighing nearly 1 tonne. 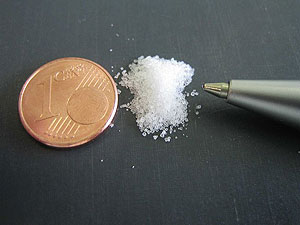 Although the inorganic reagent is highly toxic, it has varied commercial uses.

It is used in mining for extraction of gold and other expensive metals. Gold being a least reactive metal shows a high affinity for cyanide, causing it to oxidize, and dissolve in the presence of oxygen and water. Sodium gold cyanide and sodium hydroxide are the respective products of this extraction process.

The above reaction is normally addressed as cyanide process or gold cyanidation. It is typically a metallurgical technique, in which low-grade ores are generally used. There are also other methods that are often used for this extraction process.

Cyanuric chloride, cyanogen chloride, and various types of nitriles are some of the extensively used chemical compounds that are derived from sodium cyanide through several reactions. The cyanide present in NaCN functions as a nucleophile, which donates an electron pair to form a chemical bond. Nitriles that form an essential constituent in a large number of chemicals and pharmaceuticals are widely prepared by this strong neutrophile.

It is a method of collecting fish used in aquariums. In this technique, NaCN is sprayed into the fish’s habitat to stun the fish.

In general, all cyanide salts are extremely toxic and can cause severe health problems if inhaled or swallowed. This particular compound can be freely absorbed into the body through the skin in humans. It is always recommendable to take necessary precautions while handling this toxic reagent.

NaCN can easily block the cellular respiration in the living organisms by acting on cytochrome oxidase enzyme; a transmembrane protein complex found in mitochondria. Electron transport that is necessary for transmission of oxygen is completely blocked, causing decreased oxidative metabolism and oxygen utilization by the body. This in turn causes lactic acidosis, a physiological condition characterized by high levels of acid lactate in the body tissues and blood. Repeated exposure may affect the thyroid glands.

NaCN can enter the body through various routes of exposure for which rapid measures must be taken; otherwise it may cause death.

Inhalation: Sodium cyanide can cause serious repercussions like headache, weakness, sore throat, confusion, shortness of breath, convulsions, or unconsciousness, if inhaled accidentally. In such cases, the affected person should be immediately moved into fresh air and made to rest for sometimes. Mouth-to-mouth respiration should be avoided as it may affect the person providing the aid. Artificial oxygen must be administered only by trained personnel. The person should be quickly hospitalized in order to prevent any further damage.

Skin contact: This toxic material can easily get absorbed via skin, causing extreme redness and pain. In such a situation, the contaminated clothes must be first removed. This should be followed by rinsing the skin with adequate amount of water or shower. The person must then be given immediate medical attention.

Eye contact: Direct entry of NaCN in to the eyes may cause severe irritation and discomfort. The eyes may turn red and cause acute pain. Plenty of water or shower should be used for flushing the eyes. Contact lens, if worn by the affected person should first be removed before rinsing. The person should then be immediately taken to a doctor. 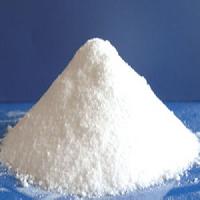 Ingestion: This poisonous salt can prove very detrimental to someone who swallows or tastes it by mistake. Burning sensation, nausea, vomiting and diarrhea are some of the after-effects seen post-ingestion of the toxic substance. Only conscious individuals must be induced vomiting, not otherwise. Protective gloves should be worn by the affected person while inducing vomiting. Mouth-to-mouth artificial respiration should strictly be avoided. Administration of artificial oxygen should only be assigned to trained personnel. Appropriate medical assistance should be immediately availed.

Breathing protection must be taken and the face should be covered with oxygen mask. Wearing protective clothing and gloves prevents the cyanide salt from entering the skin. Eye goggles, face shield or eye protection are advisable for the safety of the eyes. Eating, drinking, or smoking while handling this toxic material should not be done as minimal amount of NaCN can enter the stomach. Hands should be properly washed before eating and after completion of work.

It is not combustible but forms a toxic gas on contact with water or damp air. It may emit irritating or toxic fumes at elevated temperature. In case of a fire in the surroundings, hydrous agents, water, or carbon dioxide should not at all be used. Foam and powder are the only mediums required for extinguishing the fire.

During storage, it must be separated from any strong oxidants, acids, foodstuffs, carbon dioxide, or water. It should be kept in an airtight, unbreakable container, and stored in a dry and well-ventilated place.

Spilled toxic material must be swept into dry, sealable and labeled containers. The remainder should be cautiously neutralized with sodium or calcium hypochlorite solution. This spilled chemical should not enter the environment. Chemical protection suit, including self-contained breathing apparatus must be worn while cleaning. The contaminated and disposable chemicals as well as the spill clean-up materials should be transferred into a bag with a label and kept in a secured area. EHS must be immediately contacted for pick-up.

The toxic reagent must be detoxified to a harmless waste before disposal and treated with alkaline sodium hypochlorite in excess. The concerned person using this material is responsible for safe removal of contaminated waste, documentation preparation, use of proper waste container, and contacting EHS for pick-up. Toxic waste should be removed and disposed in accordance with EHS hazardous waste procedures.

There are numerous supply chains for NaCN all over the world like:

Current market conditions have been driven by the high rise of gold rates due to which the price of NaCN is affected as well. The current price of this toxic yet very useful compound is $ 0.44 per kilogram.