Adamantane is a chemical compound that is quite useful in some technological as well as medicinal applications. Read this article to know more about this chemical.

It is a crystalline chemical compound. It is a cycloalkane (alkanes having rings of carbon atoms in their molecular structure) and is the simplest diamondoid (structures having resemblance to diamond). It is for this reason that this compound has been named “Adamantane”.

This chemical compound has the formula of C10H16.

H. Decker was the first person who, at a 1924 conference, suggested that a Hydrocarbon with the chemical formula of C10H16 and a molecular structure like a diamond may exist.] He named this molecule “Decaterpene”.

In the same year, the German chemist Hans Meerwein tried to synthesize the compound by reacting Formaldehyde and Diethyl Malonate under the influence of Piperidine. It was the first laboratory-attempt to synthesis this substance. But instead of the desired product Meerwein got 1, 3, 5, 7-tetracarbomethoxybicyclo [3.3.1] nonane-2, 6-dione. The newfound compound was named “Meerwein’s Ester”. It was later used in the synthesis process of Adamantane and all its derivatives. Another German chemist named D. Bottger attempted to obtain the same compound using Meerwein’s Ester but got another derivative of it.

Vladimir Prelog was the first person to successfully synthesize Adamantane from Meerwein’s Ester in 1941. But the process followed by Prelog was too complicated for regular use. In 1956, the process was refined and simplified but it was still not simple enough for regular use. In 1959, Paul von Ragué Schleyer accidentally discovered a much simpler process to produce this substance.

In this process, Dicyclopentadiene was hydrogenated under the influence of a catalyst (e.g. Platinum Dioxide). Then, the resultant product was transformed into Adamantane in the presence of another catalyst (some Lewis acid like Aluminum Chloride). The substance produced in this process was very affordable.

All the mentioned processes produce a polycrystalline powder (solid composed of many small, almost always microscopic crystals) of the compound. It is possible to create single crystals from this powder. 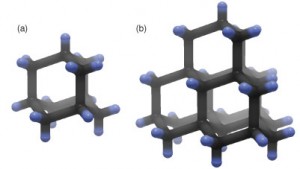 Before Adamantane was obtained through synthesis process, Czech chemists S. Landa and V. Machacek isolated this substance from petroleum in the year 1933. It was done with the help of fractional distillation. Petroleum was heated to a point where only solid impurities were left in it. The ensuing steam was sent through a Fractional Distillation Column. The Column temperature decreased because of the steam. As a result, Hydrocarbon fractions condensed all along the Column according to their different boiling points. Only a few milligram of the substance was produced in this process. But the high melting and boiling points of the compound were noticed.

A molecule of this compound contains three Cyclohexane rings (a Cycloalkane with chemical formula of C6H12). These are organized in the “armchair” or “chair” conformation (form of stereoisomerism).

According to the systematic nomenclature rule, the right name for this substance should be tricyclo[3.3.1.13,7]decane. But International Union of Pure and Applied Chemistry (IUPAC) recommend continuing using “Adamantane” as its name.

Following are the basic and physical properties of this compound:

Following are the names of some of the derivatives of this chemical compound:

Adamantane as an Antiviral Medicine

Adamantane polymers have been patented to be used as antiviral drug against HIV. H1N1 or Swine Flu viruses are capable of resisting these antiviral compounds.

Other Uses of Adamantane

Being an unfunctionalized hydrocarbon, the compound is not very useful. The few uses of this substance are mentioned below:

This compound can be harmful for humans in case of over exposure. It may cause the following problems for humans:

It may cause eye irritation in case of direct contact. In this case, the eyes should be washed with a lot of water. The victim should immediately seek medical consultancy.

It may also cause skin irritation. The affected area should be washed immediately with soap and plenty of water. The infected clothes should be removed and washed properly before re-use.

If the compound is ingested by accident, the victim should immediately take medical assistance. It is advisable to rinse the mouth and drink 2-4 glasses of water or milk to dilute the material. Vomiting should not be induced.

In case of breathing difficulty, Oxygen must be provided. If the victim is not breathing, artificial respiratory must be applied. Getting immediate medical aid is important.