Molybdenum (pronunciation: meh-LIB-deh-nem) is a shiny, silvery element belonging to the family of transition metals and is represented by the chemical symbol Mo [1, 2, 3] 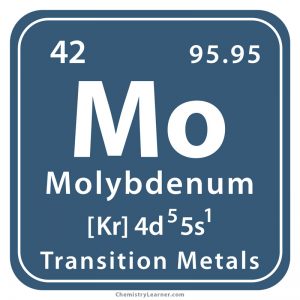 . A ductile metal with high corrosion resistance, molybdenum reacts easily with other elements to form compounds [2].

Where is Molybdenum Found 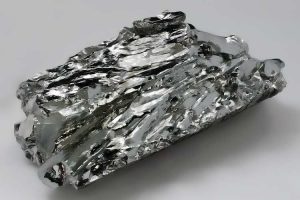 Origin of its Name: The name of the element is derived from ‘molybdos’, the Greek word for lead [1, 2].

Who discovered it: The Swedish chemist Peter Jacob Hjelm is the discoverer of molybdenum [1].

The soft, black molybdenite ore is similar to graphite in appearance and was thus incorrectly regarded as a lead ore until it was analyzed by the German-Swedish chemist Carl Wilhelm Scheele in 1778 [1]. Although he could not identify the substance, his research proved that it was neither graphite nor lead [1].

It was speculated that the mineral ore contained an unknown element but the researchers could not reduce and isolate the metal [1]. They found that the new element could be oxidized and it formed an acid when mixed with water, called molybdic acid (H2MoO4) [1]. In 1781, Peter Jacob Hjelm ground carbon and molybdic acid together with linseed oil and formed a paste [1]. He heated the mixture in a crucible and produced the molybdenum metal [1, 5]. 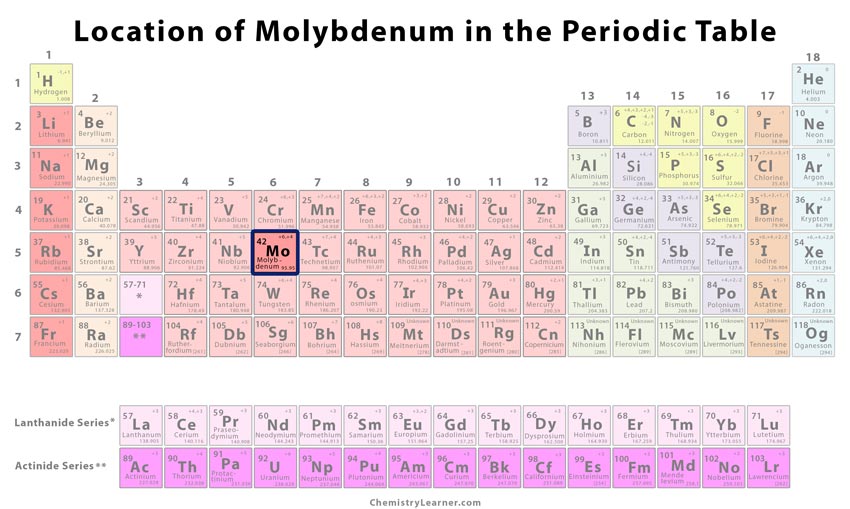 Location of Molybdenum in the Periodic Table

Properties and Characteristics of Molybdenum 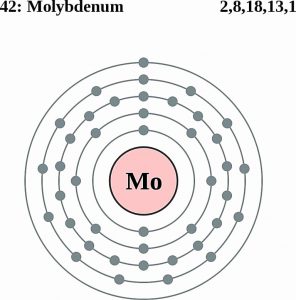 What is Molybdenum Used for

Although acute molybdenum toxicity has not been reported in humans, animal studies have indicated that high levels of element 42 may interfere with the body’s ability to absorb copper and produce copper deficiency [12]. Mining or metal workers regularly exposed to molybdenum dusts and fumes may suffer from headache, fatigue, weakness, tremors, sweating, dizziness, weight loss, joint and muscle pain, and loss of appetite [13]. According to the NIOSH, the IDLH (immediately dangerous to life and health) for molybdenum compounds is at 5000 mg/m3 [14]. 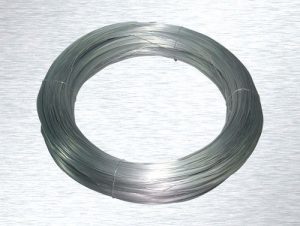