Strontium-90 is a chemical substance with radioactive properties. Read on to know all about its properties, uses and its effects on human health.

It is a radioactive substance that radiates “Beta Rays”. It is one of the radioactive isotopes of the chemical named Strontium (Sr).

Non-radioactive Strontium was first detected in the mineral called Strontianite, by Adair Crawford and William Cruikshank in 1790 in Scotland. However, Sir Humphry Davy was the first person to separate metallic Strontium.

It is a by-product of the fission reaction of Plutonium and Uranium in a nuclear reactor or in nuclear weapons. It may pollute the parts and fluids of a reactor.

Large amounts of 90Sr were produced during the nuclear weapon tests in the 1950s and 1960s. 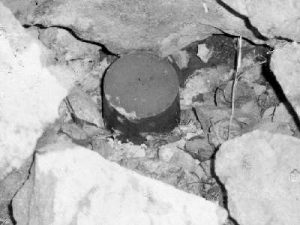 The symbol for this radioactive isotope is 90Sr.

The Beta decay equation of 90Sr is given as:

Here, the -10e denotes a negative (-ve) beta particle or an electron.

The time taken by a decaying radioactive substance to reduce to half of its original amount is referred to as the half life of that substance.

As 90Sr decays, it forms 90Y or Yttrium-90 which has a half life of 64 hours. The 90Y decay results into a stable substance called Zirconium (Zr).

The β [Beta] particles radiated by 90Y are of a high energy while those emitted by 90Sr are of a moderate energy.

Effects of Strontium-90 on Health

Read the following pieces of information to learn about some of the adverse effects of this substance on human health:

How Strontium-90 Pollutes the Environment?

In the 1950s and 1960s, due to the nuclear weapon tests, this substance accidentally spread around the world. Because of its long half life, it takes a lot of time to decay and remove entirely from the environment. At present, these tests are highly restricted in number.

A large amount of 90Sr was released into the atmosphere at the time of the Chernobyl Nuclear Disaster. It spread in significant amounts in the entire Soviet Republic. But the United States was very little affected by this radiation.

A considerable amount of Strontium-90 was introduced into the environment during the Fukushima Daiichi nuclear disaster in Japan in 2011.

It can exist in the environment without any difficulty. It creates many chemical compounds in the nature including various Oxides, Halides and Sulfides.

Usually, it is accidentally ingested along with food or water. However, inhalation of the dust of this material can also be a way of intake.

The 9090 residing in the soil can find its way to the human body through food grains and vegetables grown from the contaminated soil. But this only happens when it is released in the environment by some accident.

70- 80% of the swallowed 90Sr passes through the human body. But the remaining portion is left behind and most of it accumulates in the bones. 1 % of the total amount is distributed among blood, soft tissues, extracellular fluids and the surface areas of the bone. It stays in these areas to decay. Sometimes, it is excreted from the body.

It is widely used as medicines and for industrial purposes.

Following are some of the principal medical uses of this radioactive substance:

Read on to learn about its basic uses in industries:

Controlled amounts of this isotope can be very useful in various fields. But it can be fatal for humans in case of overexposure or accidental ingestion. It is particularly harmful due to its long half life. Care should be taken that it is not dispersed into natural surroundings by any chance.