Titanium (pronunciation: ti-TAY-nee-em) is a hard, shiny, strong, and lightweight element classified as a transition metal and represented by the chemical symbol Ti [1, 2, 3]. As compared to the other ferromagnetic elements, titanium is a weakly magnetic metal that shows its magnetic characteristics in the presence of external magnetic fields [4]. 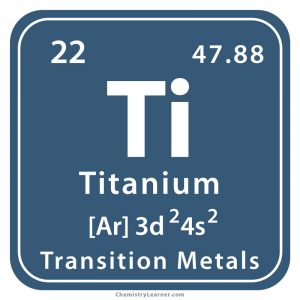 There are five stable naturally-occurring isotopes of titanium, including Titanium-46, Titanium-47, Titanium-48, Titanium-49, and Titanium-50, with Titanium-48 having the greatest natural abundance of 73.8% [5]. Titanium is characterized by 21 radioisotopes out of which the most stable are Titanium-44, Titanium-45, Titanium-51, and Titanium-52 with half-lives of 60 years, 184.8 minutes, 5.76 minutes, and 1.7 minutes respectively [5].

Where is Titanium Found

As the 9th most abundant element in the Earth’s crust, titanium is commonly found in igneous rocks and their sediments [1]. It is present in minerals like rutile (titanium dioxide), ilmenite (titanium-iron oxide), and sphene (calcium titanium nesosilicate), as well as in titanate (titanium oxide) and several iron ores [1].

It is commercially extracted from its ore through reduction of titanium (IV) chloride using either sodium or magnesium [1]. Titanium (IV) oxide is obtained from ilmenite by using either chlorine (chloride process) or sulfuric acid (sulfate process) [1]. 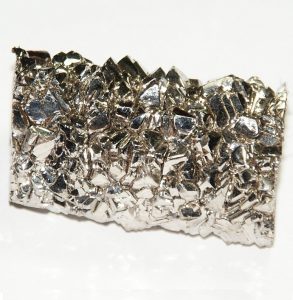 Origin of its Name: The name is derived from the word ‘Titan’, which in Greek mythology means “the sons of the Goddess Earth” [1, 2].

Who discovered it: Titanium was found by the British mineralogist and clergyman William Gregor [1].

In 1791, the titanium mineral menaccanite was found in Cornwall by William Gregor [1]. He studied it and inferred that it consisted of iron oxide along with a new metal, which he reported to the Royal Geological Society [1].

The German chemist Martin Heinrich Klaproth, in 1795, analyzed a red mineral ore called Schörl [1]. It was the oxide of an unknown element which Klaproth named titanium [1]. After learning about Gregor’s discovery, Klaproth examined menaccanite and confirmed that it was made up of titanium [1]. 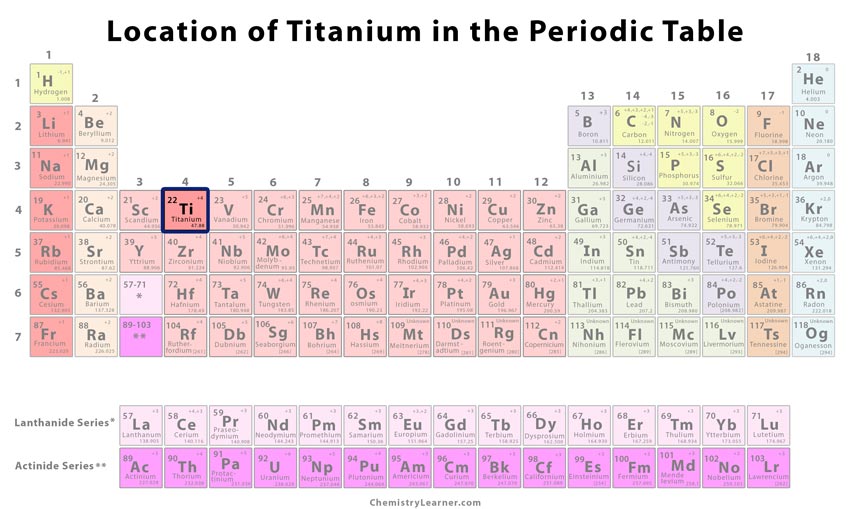 Where is Titanium Found on the Periodic Table

Properties and Characteristics of Titanium 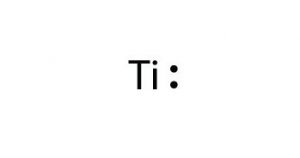 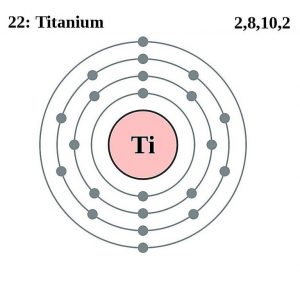 What is Titanium Used for

While pure titanium is considered non-toxic, exposure to large amounts of titanium dioxide dust may be hazardous [1]. Although the safety of nano-TiO2 is unclear, studies have shown that it may damage the liver, kidney, brain, and lung functions when it is inhaled or taken in high doses [13]. It can also be toxic to embryos in development [13]. Titanium is not known to play any biological role [1].