It is one of the most important ores of silver. Its formula is Ag2S. It is a stable and low-temperature form of Silver Sulfide.

Acanthite and Argentite are often used interchangeably. Both are ores of silver sulfide. Above 173 oC, Argentite is a form of Silver Sulfide. Below this temperature, Argentite changes to Acanthite. At room temperature, Ag2S actually stands for Acanthite.

Acanthite and Galena are two most important ores of Silver. While Galena is a lead ore also containing silver (normally about 1 %); however, on processing, most of the silver in Argentiferous Galena is actually microscopic inclusion of Acanthite crystals. 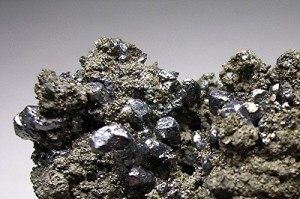 Know about some of the major physical characteristics of this substance.

Usually, it is found as pseudo-cubic and pseudo-octahedral crystals. Monoclinic crystals of thorn shape are also observed, which are generally small to microscopic in dimension. Its crystals include well-formed cubes, octahedrons and dodecahedrons.

Some of the important data about its crystals are as follows:

Other Calculated Properties and Facts

Similar metals to Acanthite include:

This mineral is produced predominantly in the following mining regions:

This mineral can be physically identified by its luster, density, toughness, sectility and comparison with other silver sulfosalts.