Holmium (pronunciation: HOHL-mee-em) is a silvery metal belonging to the group of lanthanides and represented by the chemical symbol Ho [1, 2]. It has one stable naturally occurring isotope, 165Ho, with a natural abundance of 100% while its most stable radioisotope, 163Ho has a half-life period of 4,570 years [3]. 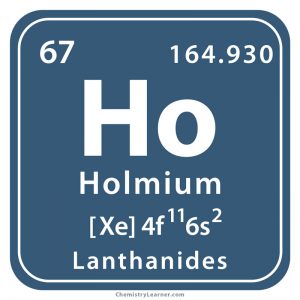 Where is Holmium Found

Although Holmium does not freely occur in nature, it is found as a component in several minerals including bastnaesite and monazite [1, 4]. Commercially, it is obtained from monazite, bastnaesite, and xenotime ores through ion exchange and is isolated by calcium reduction of its anhydrous fluoride [1, 4, 5]. While top 3 holmium producing countries include China, Russia, and Malaysia, the top 3 nations with the largest holmium holdings in the world are China, the CIS countries, and the USA [1].

Origin of its Name: It is derived from ‘Holmia’, the Latin name for the Swedish capital Stockholm [1].

Who discovered it: Holmium was discovered by the Swedish chemist Per Teodor Cleve, and independently by the Swiss chemist Louis Soret along with Marc Delafontaine [1].

In 1878, Louis Soret and Marc Delafontaine while investigating yttrium at Geneva found that it was contaminated with other lanthanoids, observing unexplained spectral lines [1, 4]. They extracted a new element ‘X’, which is now known as holmium [4]. In that same year, Per Teodor Cleve worked with erbium at Uppsala to discover a brown and a green substance, which he named holmia (holmium oxide) and thulia (thulium oxide) respectively [4].

The pure form of holmium was separated by the Swedish botanist Otto Holmberg [4]. 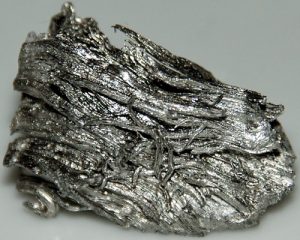 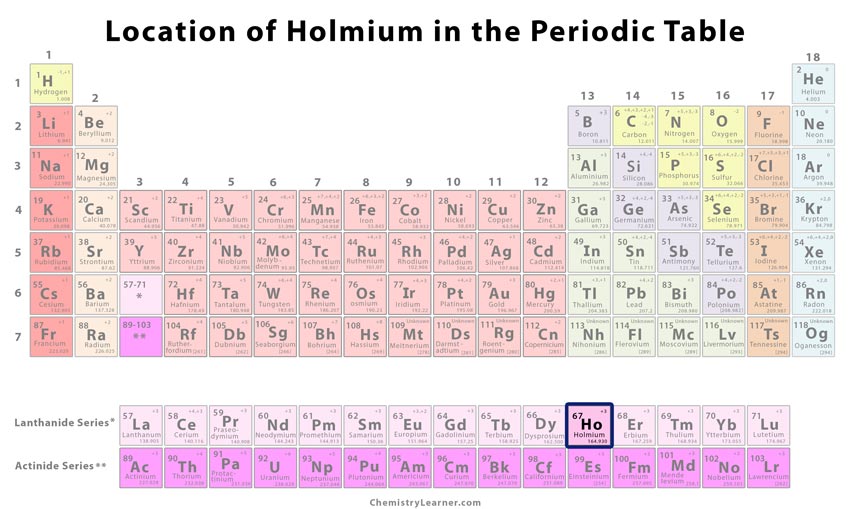 Location of Holmium in the Periodic Table

Properties and Characteristics of Holmium 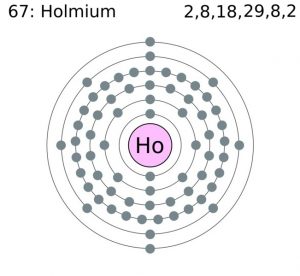 How is Holmium Used

The element 67 is not considered to be harmful because it has low toxicity [4]. However, holmium salts can be toxic if orally consumed, inhaled, or injected in large amounts [9]. 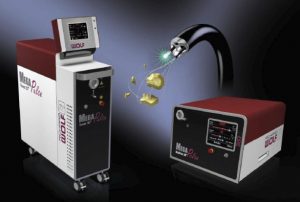