Definition: What are lanthanides?

Lanthanides belong to the category of inner transition metals with a partially filled 4f shell. They are called lanthanides because they have similar chemical properties as that of lanthanum, the first element in the series [1].

Where are the lanthanides located in the periodic table?

The lanthanides are located in group 3 of the 6th period of the periodic table in between barium (Ba) and hafnium (Hf). They are shown below the body of the periodic table for simplicity. They are also known as f-block elements since the 4f shell is getting filled progressively as the atomic number changes from 57 to 71. The lanthanides have a general electronic configuration given by [Xe] 4f1-145d0-16s2, where [Xe] is the electronic configuration of the nearest noble gas xenon [1, 2]. 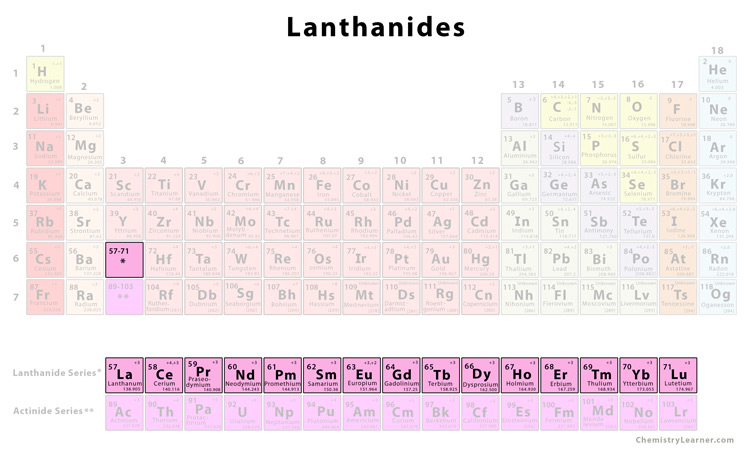 Lanthanides on the Periodic Table

Common Properties and Characteristics of the Lanthanides

Lanthanides have similar properties to one another and display several physical, chemical, and some magnetic features.

Uses and Applications of Lanthanides [5]

Lanthanides are obtained from several minerals that are available in the earth’s crust. The minerals that are mined include bastnasite, laterite clays, monazite, and loparite. Among these, bastnasite is the principal source of rare earth elements and is widely found in California, USA [6].

Ans. Lanthanides are called inner transitional elements because of their position in the periodic table. They are placed in between the s-block element barium and the d-block element hafnium.

Q.2. What is an older name for lanthanides?

Ans. Lanthanides come from lanthanum, which used to be called a rare earth element at the time of discovery.

Ans. Promethium, whose all the isotopes are radioactive, is the only lanthanide with such properties. The rest of the elements in the family are not radioactive.

Q.4. How reactive are lanthanides?

Ans.  Some of the lanthanides, namely, La, Ce, Pr, Nd, and Eu, are very reactive. When exposed to air, they react with oxygen and turn into a pale color.