Lanthanum (pronunciation: LAN-the-nem) [3] is a soft, silvery rare-earth metal belonging to the lanthanoids family and represented by the chemical symbol La [1, 2]. Its main isotopes include the most abundant 139La (with 99.91% natural abundance) and the most stable 138La, the radioactive isotope with a half-life period of 1.06 X 1026 years [1, 4]. 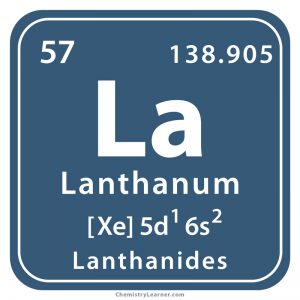 Where can Lanthanum be Found

The element naturally occurs in bastnaesite and monazite, making up 38% and 25% of the rare-earth minerals respectively [1]. Isolation of lanthanum from these minerals involves solvent extraction and ion-exchange separation techniques [1]. The metal can be produced through calcium reduction of anhydrous fluoride [1]. The top 3 lanthanum producing countries include China, Russia, and Malaysia while the top 3 countries with the largest lanthanum reserves are China, CIS Countries, and the USA [1].

Origin of its Name: The name of the element is derived from the Greek word ‘lanthanein’, which means to lie hidden, as its existence in cerium oxide was long undetected [1].

Who discovered it: The Swedish chemist Carl Gustaf Mosander is credited with the discovery of lanthanum [1].

In January 1839, lanthanum was extracted by Carl Mosander while working on his sample of cerium at the Karolinska Institute in Sweden [1]. He took powdered cerium nitrate and treated it with dilute nitric acid [5]. He observed that some of the nitrate powder dissolved in the acid, and then he decided to isolate the mixture from the precipitate by using heat and sodium oxalate [5]. The pale brick-colored oxide obtained was given the name lanthana [3, 5].

A student at the Karolinska Institute, Axel Erdmann discovered the element independently from a new mineral found in a Norwegian fjord [1, 5]. The new mineral was named mosandrite after Carl Mosander who produced impure lanthanum from anhydrous cerium chloride [5]. In 1923, pure lanthanum was obtained by Kremers and Stevens through electrolysis of fused halides [5]. 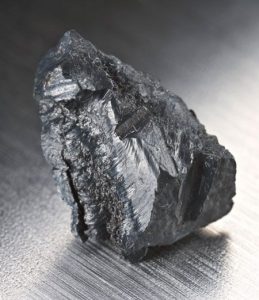 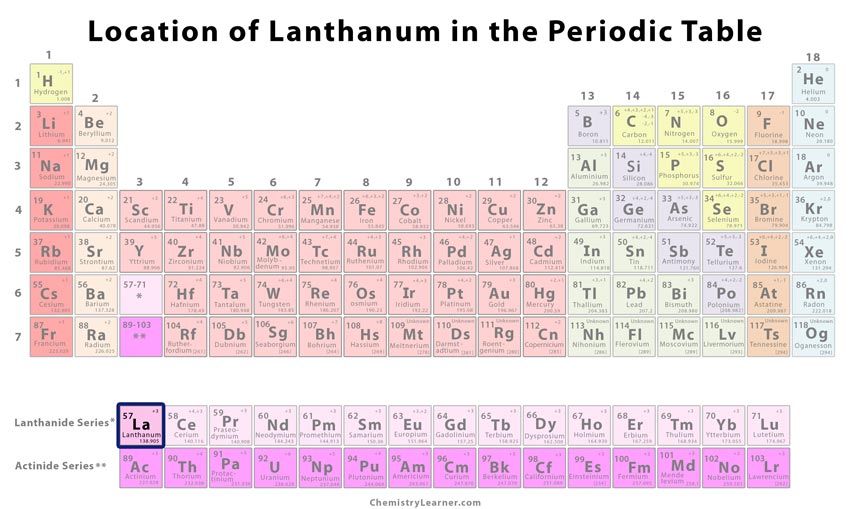 Location of Lanthanum in the Periodic Table

Properties and Characteristics of Lanthanum 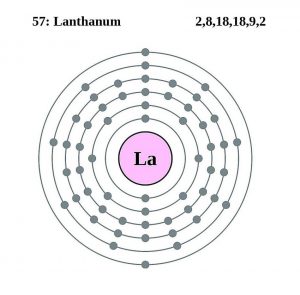 What is Lanthanum Used for

Although lanthanum metal is not commercially used, its alloys may have some uses [1]:

Lanthanum and its compounds, although not known to play any biological role in humans, can be a little or moderately toxic and should be handled with caution and proper protection [1].

How much does Lanthanum Cost