Definition: What are actinides?

Actinides belong to the family of inner transition metals with partially filled 5f shell. They are named after actinium, the first element in the series, and play a crucial role in nuclear chemistry [1].

Where are the actinides located in the periodic table?

The actinides are located in group 3 of the 7th period of the periodic table in between radium (Ra) and Rutherfordium (Rf). They are shown below the body of the periodic table for simplicity. They are also known as f-block elements since the 5f shell is getting filled progressively as the atomic number changes from 89 to 103. The actinides have a general electronic configuration given by [Rn] 5f1-146d0-17s2, where [Rn] is the electronic configuration of the nearest noble gas radon [2]. 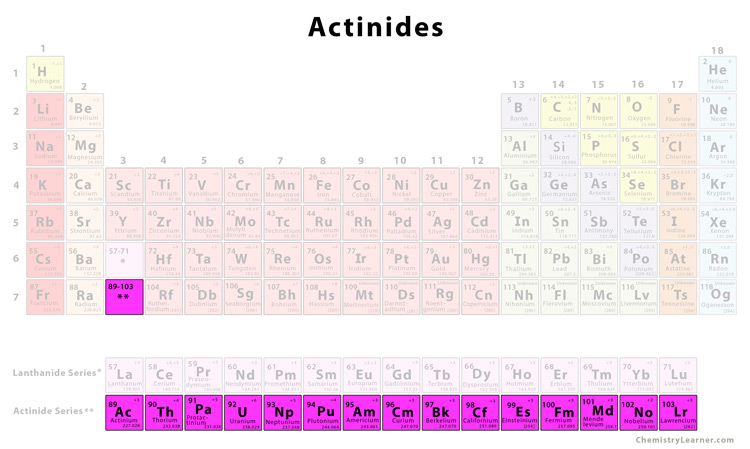 Actinides on the Periodic Table

Common Properties and Characteristics of the Actinides

Uses and Applications of Actinides [6]

Q.1. Why are actinides radioactive?

Ans. Actinides are radioactive because of their unstable nuclei.

Ans.  Actinides are not considered to be rare earth as most of them are not available in nature and are artificially synthesized in the laboratory.

Ans. The two actinides that occur naturally in the earth’s crust are thorium and uranium. Besides, actinium and protactinium are also available in a tiny amount.

Q.4. How are actinides extracted?

Ans. Uranium and thorium can be easily extracted from the earth’s crust from their fluorides, which are reduced with calcium by redox reactions.