Definition: What are noble gases?

Noble gases belong to a special category of elements in the periodic table that are inert, non-metal, and non-reactive. The special feature of these elements is that their outermost orbital is complete and do not have any free electrons to participate in chemical reactions. Hence, they exist as monoatomic molecules. Because of their unreactive nature, they can be used in applications where chemical reactions are undesired [1].

Where are the noble gases located on the periodic table?

The noble gases are located toward the right of the periodic tablein group number VIIIa (new IUPAC) or 18 (CAS) [1]. 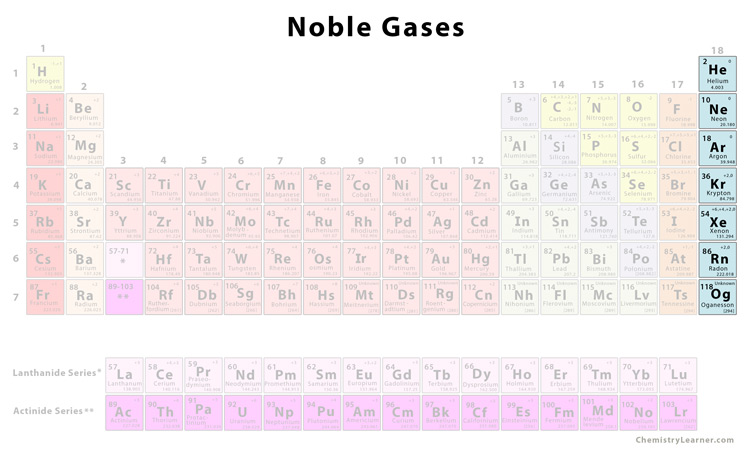 Noble Gases on the Periodic Table

The properties and characteristics of noble gases can be traced back to their atomic structure. The arrangement of electrons in noble gases is such that their valence shell isfull and complete. As a result, there are no electrons to participate in chemical bonding, thereby, rendering them stable and inert. This explains why they do not have any chemical reactivity [2 – 4]. A noticeable fact about noble gases is that they are generally present in Earth’s atmosphere with argon being the most abundant.

Noble gases have a wide variety of applications ranging from incandescent light bulbs to excimerlasers. Typically, a charge is sent through a tube containing a particular noble gas which, then, excites the gas giving distinctive radiation and color. This is the principle behind gas-discharge tubes and lamps [6].

Table Of ContentsWhat is an Elementary Reaction [1-2]Molecularity and Rate Law of...

Table Of ContentsWhat is Metathesis Reaction [1-12]Types and Examples of Metathesis...