Thulium (pronounced as Thoo-lee-em) [2] is a soft, silver-gray rare earth metal [3] belonging to the Lanthanides group and represented by the symbol Tm [1]. While its most abundant, naturally occurring isotope is 169Tm, it has 34 radioactive isotopes, out of which the most stable one is 171Tm with a half-life period of 1.92 years [4]. 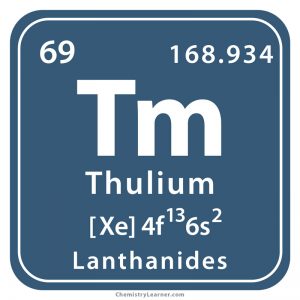 Thulium is found in small quantities in monazite, a mineral that has approximately 20 parts per million (ppm) of the metal in the earth’s crust [1]. It is then commercially extracted through ion-exchange and solvent-extraction processes [1]. The element can as well be isolated through calcium reduction of anhydrous fluoride or by reduction of oxide with lanthanum [1]. While the top 3 thulium producing nations are China, Russia, and Malaysia, the top 3 thulium reserve holders are China, CIS Countries, and Russia [1].

Origin of its Name: It is named after Thule, the ancient name that stood for the present-day Scandinavia [1, 2].

Who discovered it: The Swedish chemist Per Teodor Cleve is credited for the discovery of thulium [1].

When and How was it discovered

Men started finding the lanthanoids or rare earth elements in 1794 when yttrium was found by Johan Gadolin [1]. Later, the chemists analyzed the composition of yttrium and observed that it was contaminated with chemically similar elements [1]. As a result, two new elements terbium and erbium were isolated in 1843 [1].

Per Teodor Cleve started working on erbium in 1874 and was able to successfully isolate thulium in its oxide form in 1879 at the Uppsala University, Sweden [1, 5]. In 1911, the exact atomic weight of thulium was determined by Theodore William Richards, an American chemist who carried out 15,000 thulium bromate-recrystallizations to produce the pure form of thulium [1]. 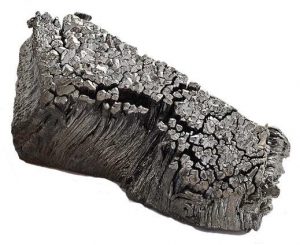 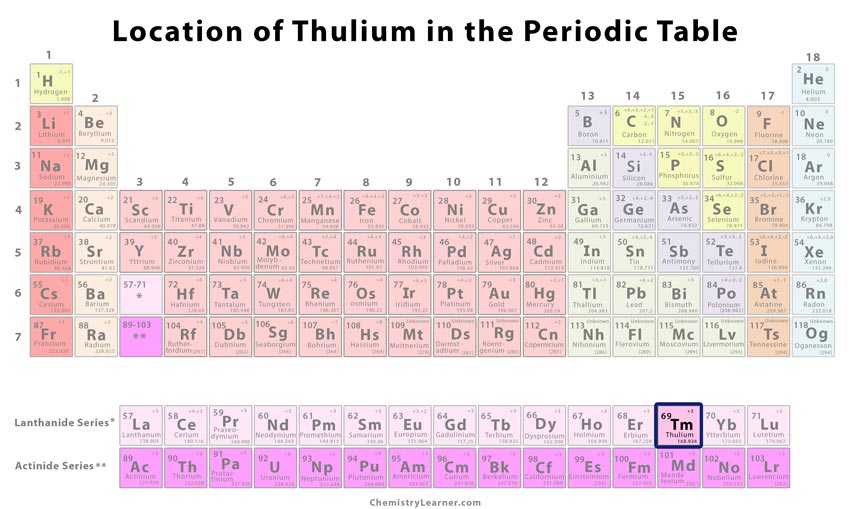 Location of Thulium in the Periodic Table

Properties and Characteristics of Thulium 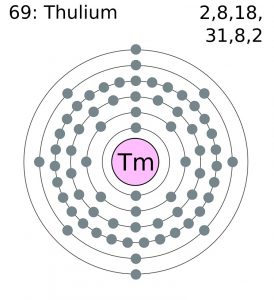 What is Thulium used for

Being a non-toxic element, it does not cause any health hazards [1]. 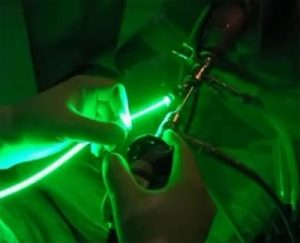