Uranium-238 is a common radioactive isotope of Uranium. It is not a fissile substance thus cannot sustain nuclear fission. However this isotope is a fertile material, which means other fissile materials are generated from it.

Almost all Uranium in nature is found in the form of Uranium-238. Other isotopes like Uranium 234, Uranium 235 and Uranium 236 are found in smaller quantities in natural Uranium.

The formula for this radioactive isotope is 238U. It is also denoted with U-238. 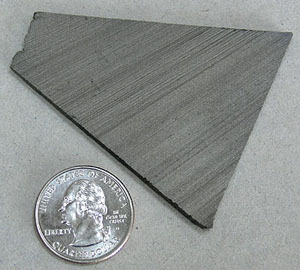 The radioactive and physical properties of this substance include:

The unstable atomic nucleus of Uranium-238 emits ionizing particles and loses energy in order to achieve a stable state. This process is called the Radioactive decay. This isotope undergoes Alpha decay by emitting Alpha rays. It has a decay energy of 4.267 MeV.

Following is the equation for the Alpha (α) radiation of this isotope:

The above equation can also be denoted as

This series is also known as “Radium Series”. All the above elements are present (even if for a short time) in any sample containing Uranium be it metal, mineral or compound.

One atom of this substance contains 92 protons and 145 neutrons.

Half life is the time period taken by a radioactive substance to decay and reduce to the half of its original amount. Uranium-238 has a very long half life of 4.468 billon years.

This material does not undergo fission unless struck by a high energy neutron. It collides with a neutron and turns into Uranium 239, which undergoes decay and produces Plutonium-239. This final radioactive isotope is highly useful in power plants.

This radioactive metal has a very long half life. The Depleted Uranium (DU) is very heavy having a high density level. These properties make this substance useful in various industries.

Fertile uranium-238 isotope is used in Breeder Reactors for its neutron capture ability. It produces fissile products like Plutonium- 239, which is used as a nuclear fuel to produce high amounts of energy. This technology is used in many experimental nuclear reactors.

It is used as a shield against harmful radiation in the form of Depleted Uranium Dioxide and Depleted Uranium. The non-radioactive casing of the Shield can easily stop its Alpha radiation from causing any harm. The high atomic weight and electron numbers of this material can efficiently absorb Gamma Rays and X Rays. However, it cannot stop fast neutrons having a speed of 14,000 km/s, as effectively as ordinary water.

Researchers are trying to find out whether Uranium Dioxide concretes can be used as a Cask Storage material for storing radioactive waste.

The radioactive property of a material is applied to determine the age of objects like rocks and fossils. Uranium-238 is used in this dating process. The decay chain of this isotope is well documented with Lead being the final stable element. The whole decay series happens at a constant rate which helps to correctly date rocks and minerals.

Downnblending is the opposite process of enriching. Enriched Uranium is downblended with the help of depleted Uranium for using it as commercial nuclear fuel. It is used to produce Mixed Oxide Fuel (MOX) along with Plutonium- 239.

Is Uranium-238 Harmful for Human Health?

Radioactive Uranium can be found in nature which can cause health problems for humans. It can enter the body through inhalation, ingestion and sometimes through open wounds. However, it cannot harm an organism from the outside as its Alpha radiation does not penetrate the skin.

Most of the Uranium-238 ingested or inhaled usually leaves the body. But a very small amount gets accumulated in the bones. It remains there undergoing radioactive decay for a very long time. This radiation can cause adverse health effects like kidney damage and cancer.

There are many companies who supply this material in different parts of the world. The price for one pound of this metal ranges from $ 100 to $ 110.

Uranium-238 is the main radioactive isotope of natural Uranium. It produces many other useful radioactive elements while undergoing decay. This makes this radioactive metal quite useful and valuable.